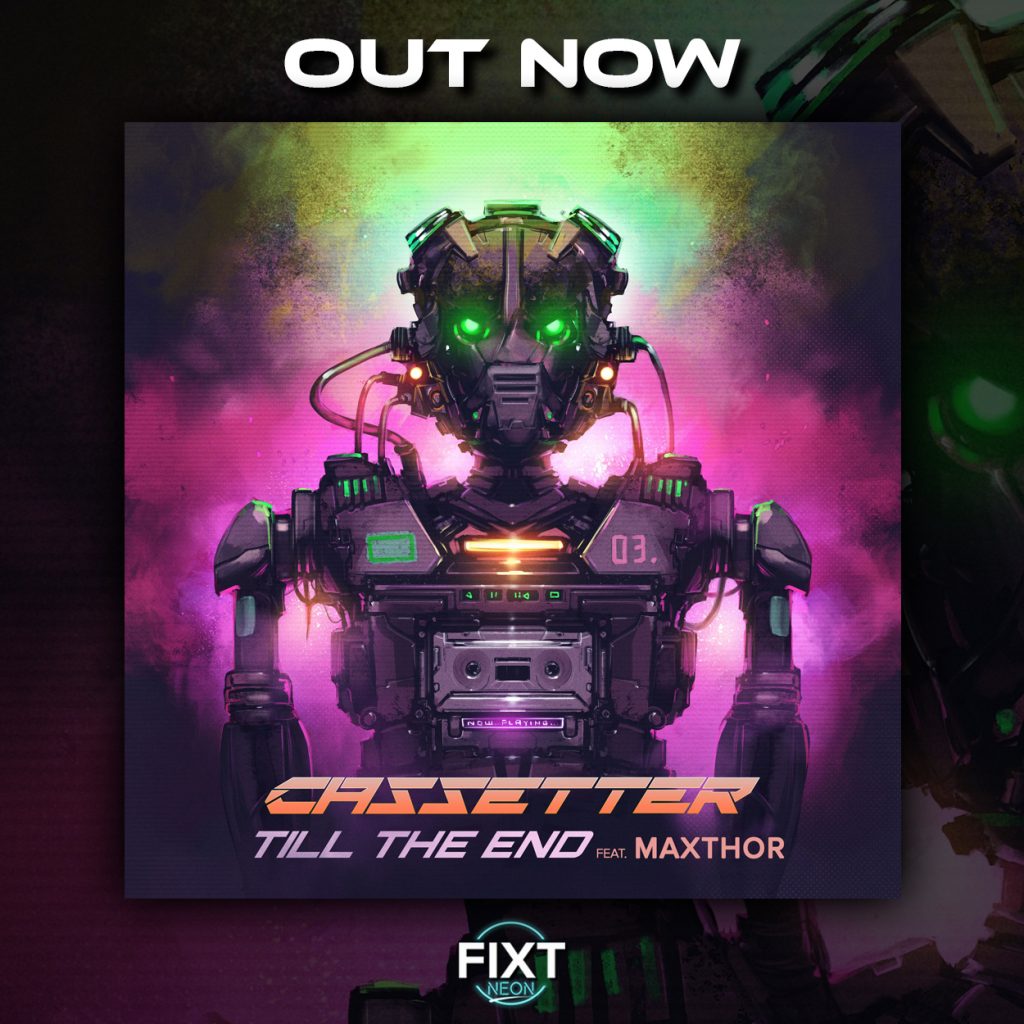 Cassetter’s brawny production style combines with Maxthor’s unmistakable vocals for a one-of-a-kind collaboration on the new song, “Till the End.”  The track’s complex emotional tone and hook-heavy chorus create an addictive listening experience that will have listeners reaching for the repeat button.

“Till the End” is out now on all platforms from independent retro synth label FiXT Neon. 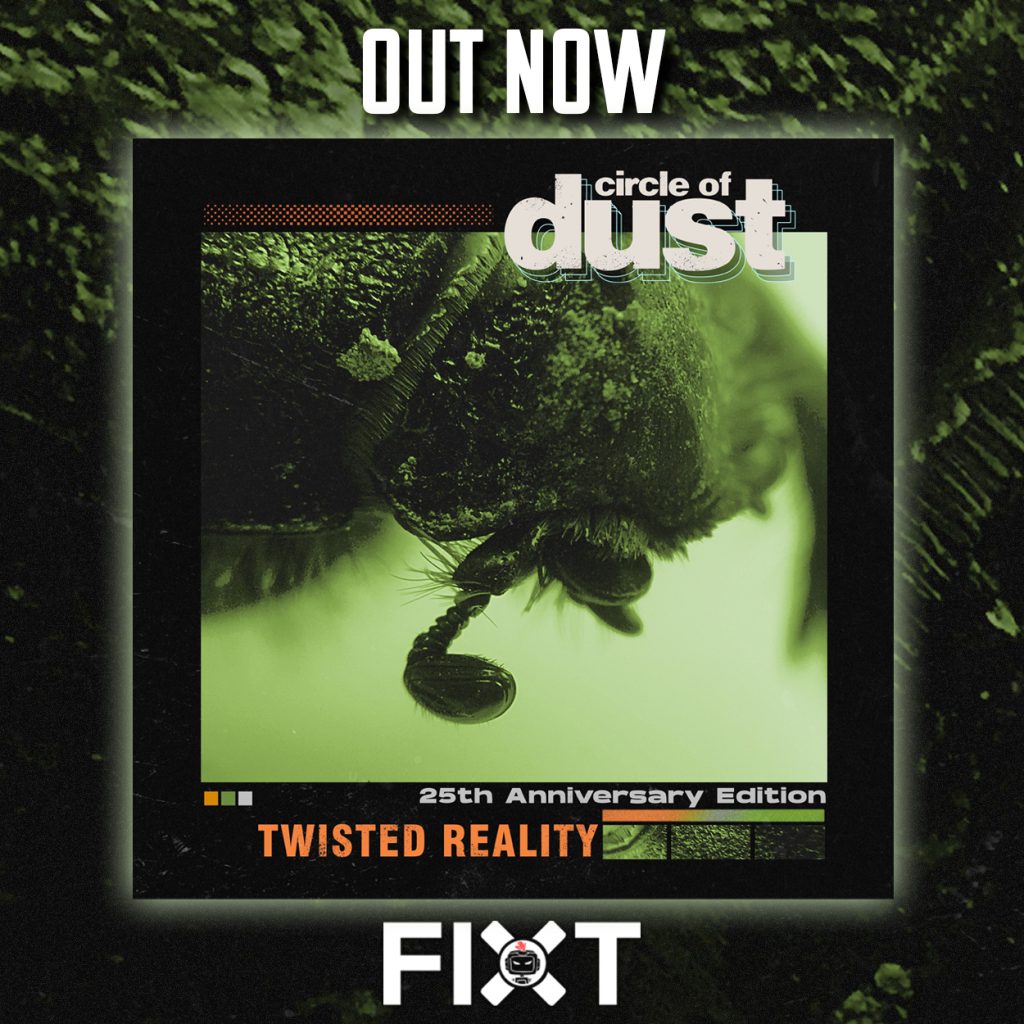 Circle Of Dust’s Classic “Twisted Reality” Gets An Upgrade

The hard-hitting Circle of Dust classic “Twisted Reality” gets an upgrade with this exciting 25th anniversary mix, making this the definitive version of a powerful entry from Circle of Dust’s debut album.

The 25th Anniversary Mix of “Twisted Reality” is available now on all platforms from independent electronic rock label FiXT. 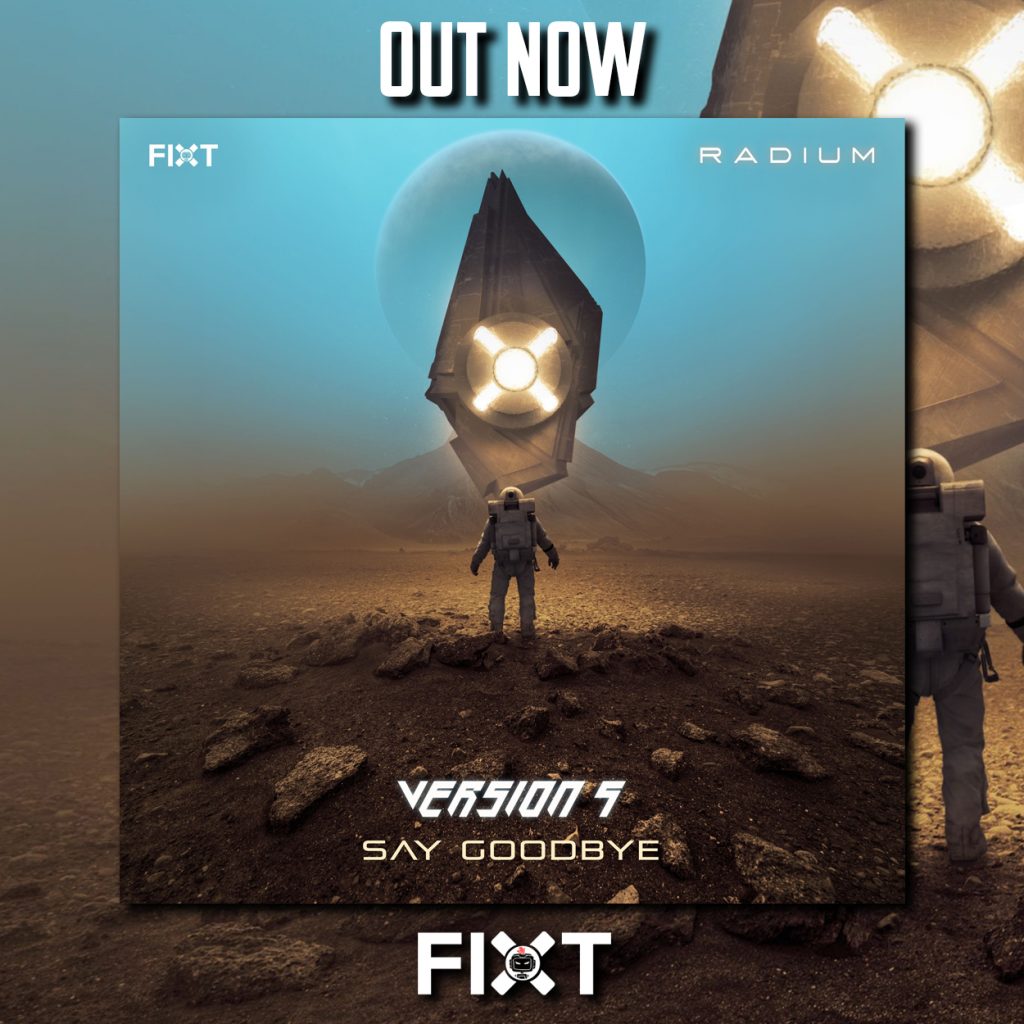 The FiXT: Radium compilation reaches red-hot levels with the high-octane new track, “Say Goodbye.” The song wastes no time getting down to business, jumping directly into a bouncy riff and energetic rhythm before taking listeners through a rollercoaster ride of thrilling peaks and valleys.

Say Goodbye is the highest octane tune we’ve written to date. We wanted it to hit hard from the get-go, with a guitar riff, vicious verse layers and a big chorus payoff. Version 5 is all about the fine line of pop sensibilities, aggressive beats and slamming guitars.

“Say Goodbye” is out now on all platforms from independent electronic rock label FiXT. 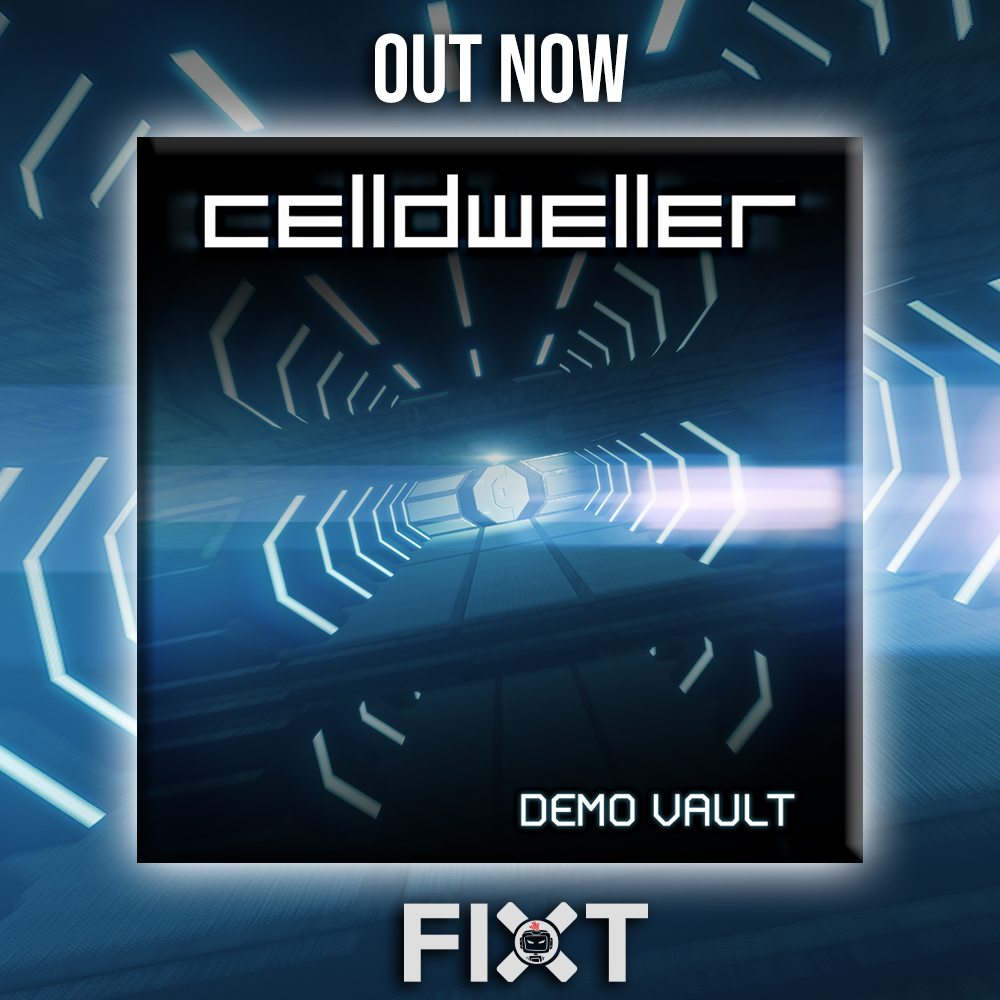 Celldweller fans rejoice, a treasure trove of rare demos are coming for the first time to all major music stores! This collection will offer valuable insight into the creative process behind Klayton’s Celldweller project, revealing works-in-progress on 14 tracks including ones that never received a final public version.

The scorching modern metal approach of “Ballzout” is guaranteed to hit the sweet spot for Celldweller fans. “Ballzout” and the complete Demo Vault album are available now from independent electronic rock label FiXT. 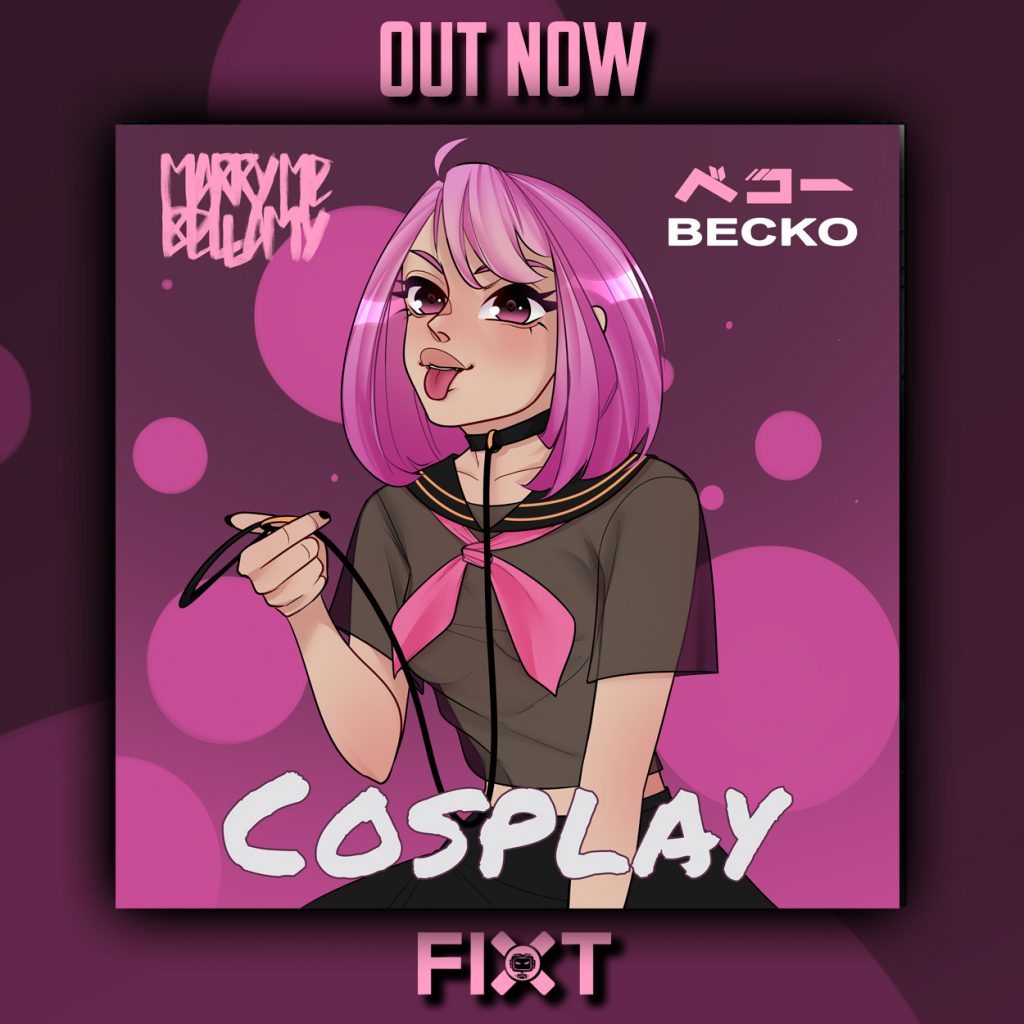 Becko and Marry Me, Bellamy Join Forces On A Bass-Heavy, New Creation, “Cosplay”

Becko and Marry Me, Bellamy join forces on a bass-heavy, avant-garde new creation, “Cosplay.” The song’s vocals contrast in an exciting mix, as Marry Me, Bellamy’s signature low-key spoken-word style alternates with Becko’s aggressive screams for a track with remarkable texture.

“Cosplay” is out now on all platforms from independent electronic rock label FiXT. 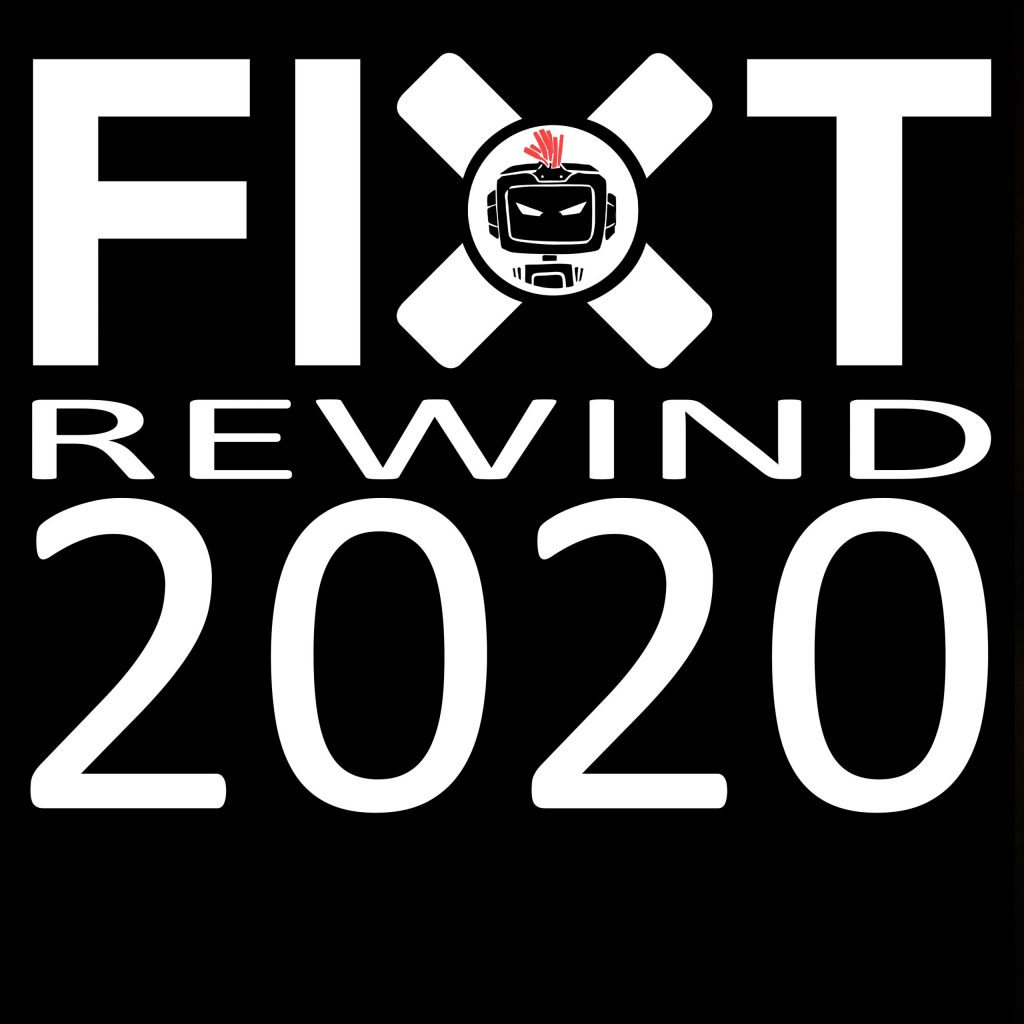 2020 goes out with a bang for the FiXT Team. With a slew of interviews, contests, and signing several new artists, here’s a recap of some of the highlights from the year!

In November, Klayton launched a Patreon account complete with an exclusive discord.

FiXT has embraced the stream community since 2015, where all Twitch streamers can use our original music for FREE (no DMCAs), and this year we launched our own stream team!

“FiXT was one of the first 5 labels to sign a deal with Twitch back in 2015 and make our catalog of original music Twitch safe. Since then we’ve continued to expand our interest in partnering with the streaming community, with various sponsorships as well as making our catalog available on stream-safe streaming platform Pretzel. Now, with the FiXT Music Stream Team, we’re incredibly proud to be working with a core group of passionate streamers, helping us spread the music and our message even further.”

Brandon Smith, of The Anix and James Rhodes, FiXT VP sat down and answered your questions over a Zoom Q&A.

“Die With You” Remix Contest

In February, James Rhodes, FiXT VP hung out with No Ordinary Nerd Podcast to discuss the future of the label, expanding and adding to our label roster, music in video games, Altered Carbon and Lost in Space. In March James appeared on the Rick Barker Podcast to talk about how to use the lucrative world of gaming as a revenue stream for Indie Artists. In June he appeared on the “Built-In Iowa Podcast” to discuss building FiXT and FiXT Neon up from Burlington, Iowa. He was also recognized by A2IM for his work in supporting the growth of the independent community.

While James was away on a business trip to L.A. the FiXT Team missed him so much they gave the entire office a makeover in his image! Legend has it you can still see James’s face in every deep dark corner of the office if you look hard enough. 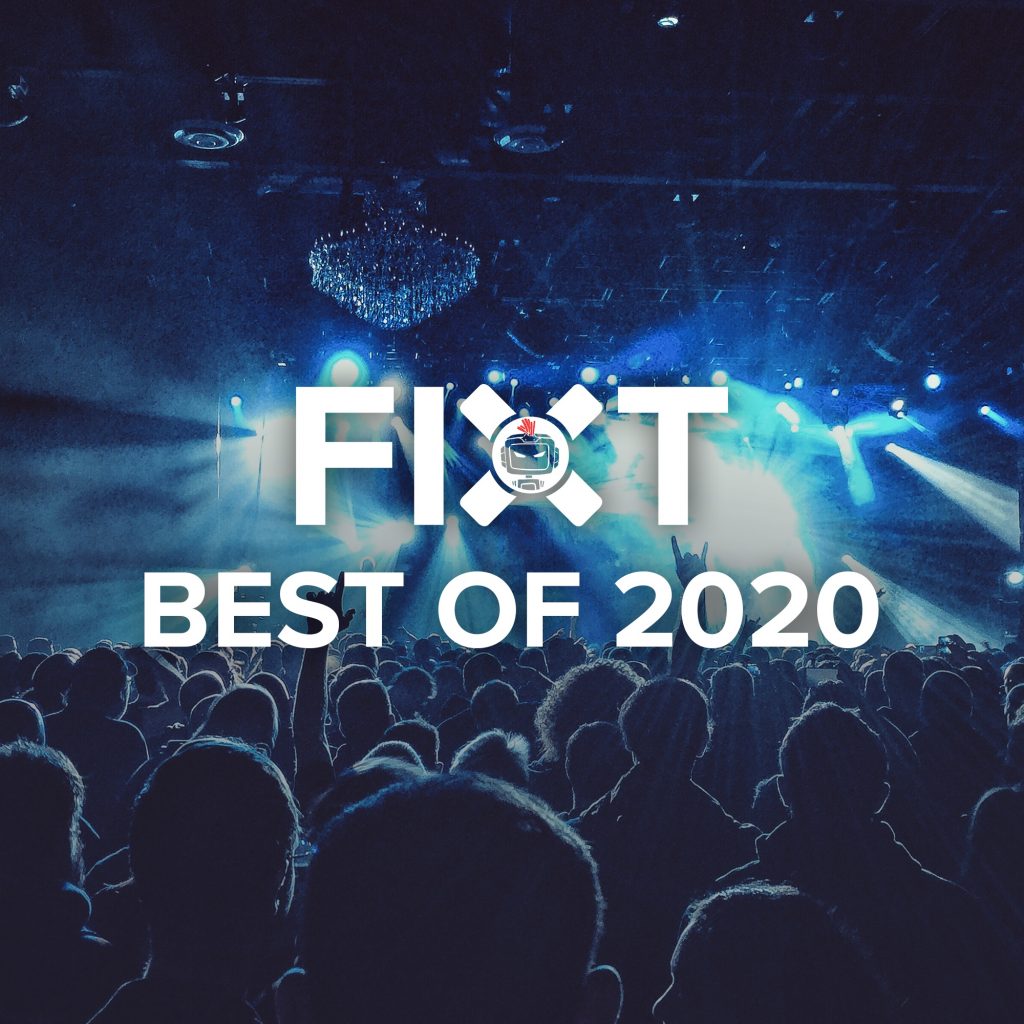 FiXT is proud to present The Anix “Die With You” Remix Contest Compilation album.

Void Chapter returns with a titanic blend of modern metal and electronics on their sophomore album, The Uprising.

Circle of Dust returns with the 25th Anniversary Mixes of the 1995 debut album track “Onenemy”..

In celebration of the 25th anniversary of Circle of Dust’s 1995 debut self-titled album, “Rational Lies” has received a brand new mix, bringing new life to the track.

Circle of Dust’s anniversary mixes blazes onward with “Demoralize.” Klayton has taken the iconic original and transformed its audio quality into a fully modern production with a well-sculpted sonic space, breathing new life and dimension into an industrial classic.

GRAPHITE is the artist’s latest full-length offering and delivers one of the strongest tracklists from the creator to date.

Becko’s A.T. Field is a dynamic powerhouse of songs showcasing his range of alternative electronic pop.

The wait is over, Becko’s pioneering full-length album Inner Self is available now!

FiXT is proud to present the Celldweller “My Disintegration” Remix Contest Compilation album.

The sinister atmosphere of Circle of Dust’s “Nightfall” takes on new life with this invigorating 25th Anniversary Mix.

“Self Inflict” was a standout entry on Circle of Dust’s self-titled debut album. Now, Klayton breathes new life into the rugged industrial classic with this 25th Anniversary Mix.

This year we dropped hundreds of tracks, including original songs from the Raizer, The Anix, Celldweller, Circle Of Dust, Voicians, The Algorithm, Void Chapter, NUTRONIC, Soul Extract, Becko, Prymus, Aura Shred, NVRENDS, GXG, and 3D Stas + remixes from Cyborgdrive, Metarmonica, Formal One, Cyanotic, Hard Box, The Forgotten, Cliff Lin, FreqGen, Fury Weekend, Extra Terra, Rabbit Junk, SWARM, and Kaiko. Dive back in and catch up on anything you may have missed.